From an article in the LA Times:

"The Los Angeles Times spells the vegetable "chile" and the spicy soup "chili." The sauce made of chile, onion and tomato? Chile sauce."

Here's a photogtraphic summary of the recipe. Detailed instructions are at the bottom of the page.

Step 1: 1/2 Pound of dried guajillo chiles. (I used guajillos in this batch because they can be hotter than Anaheims, and I'm the only one going to be enjoying this particular batch. Turns out they are an extremely mild batch of chiles.) For whatever reason, this picture doesn't do justice to how many chiles are in a 1/2 pound. That blue bowl is the biggest ceramic bowl in our kitchen. 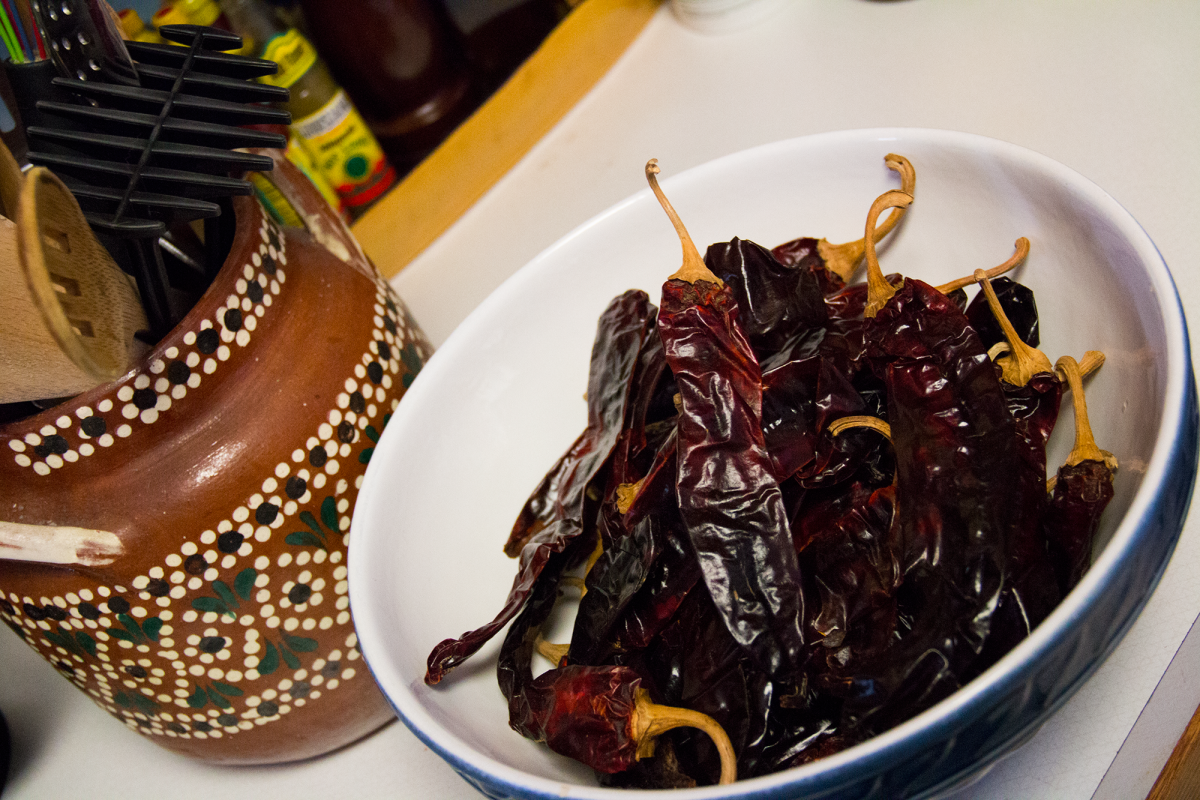 Step 2: De-seeded, de-veined chiles. It takes about 30 to 45 minutes to do the job if you're meticulous and want to get every seed and every vein because you're cooking for Minnesotans who think black pepper is spicy. If you're just cooking, it takes about 15 minutes to run your finger through the chiles and leave a little spice behind.

Step 3: Cover with boiling water and steam the chiles for about 20 minutes. 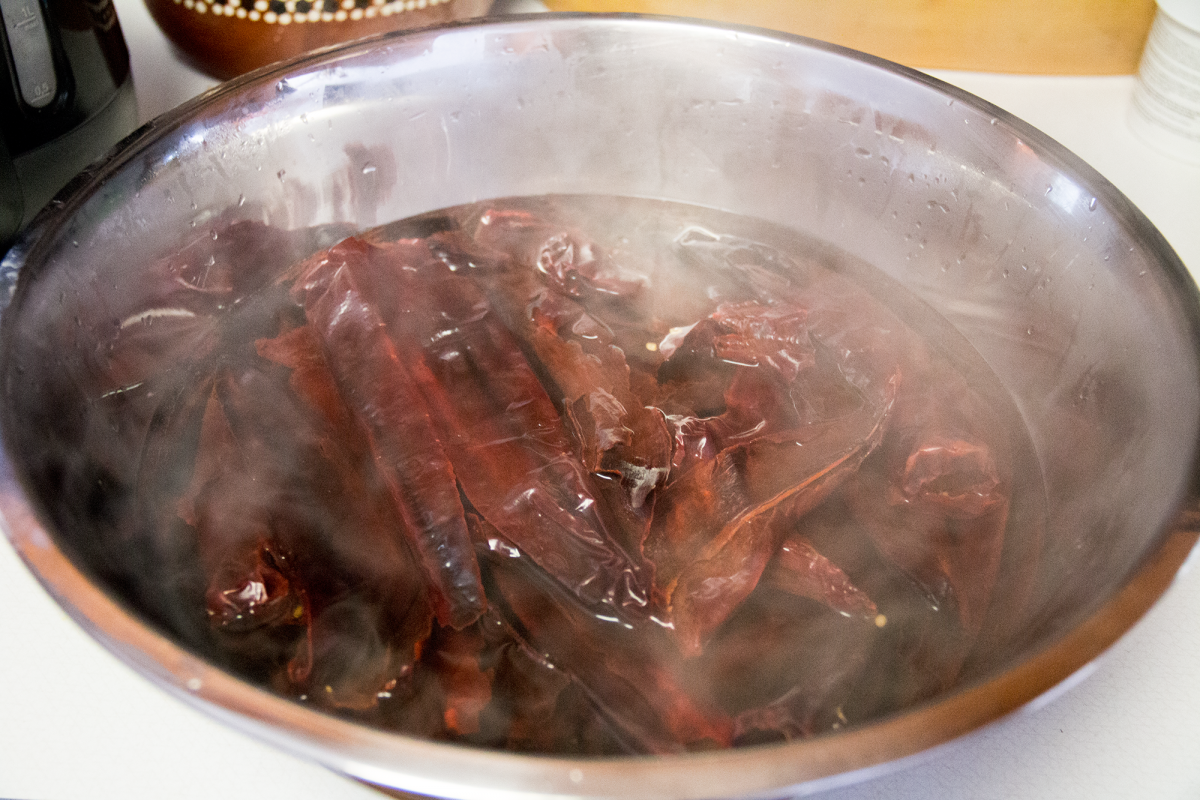 Step 4: Puree the reconstituted chiles to a thick paste. 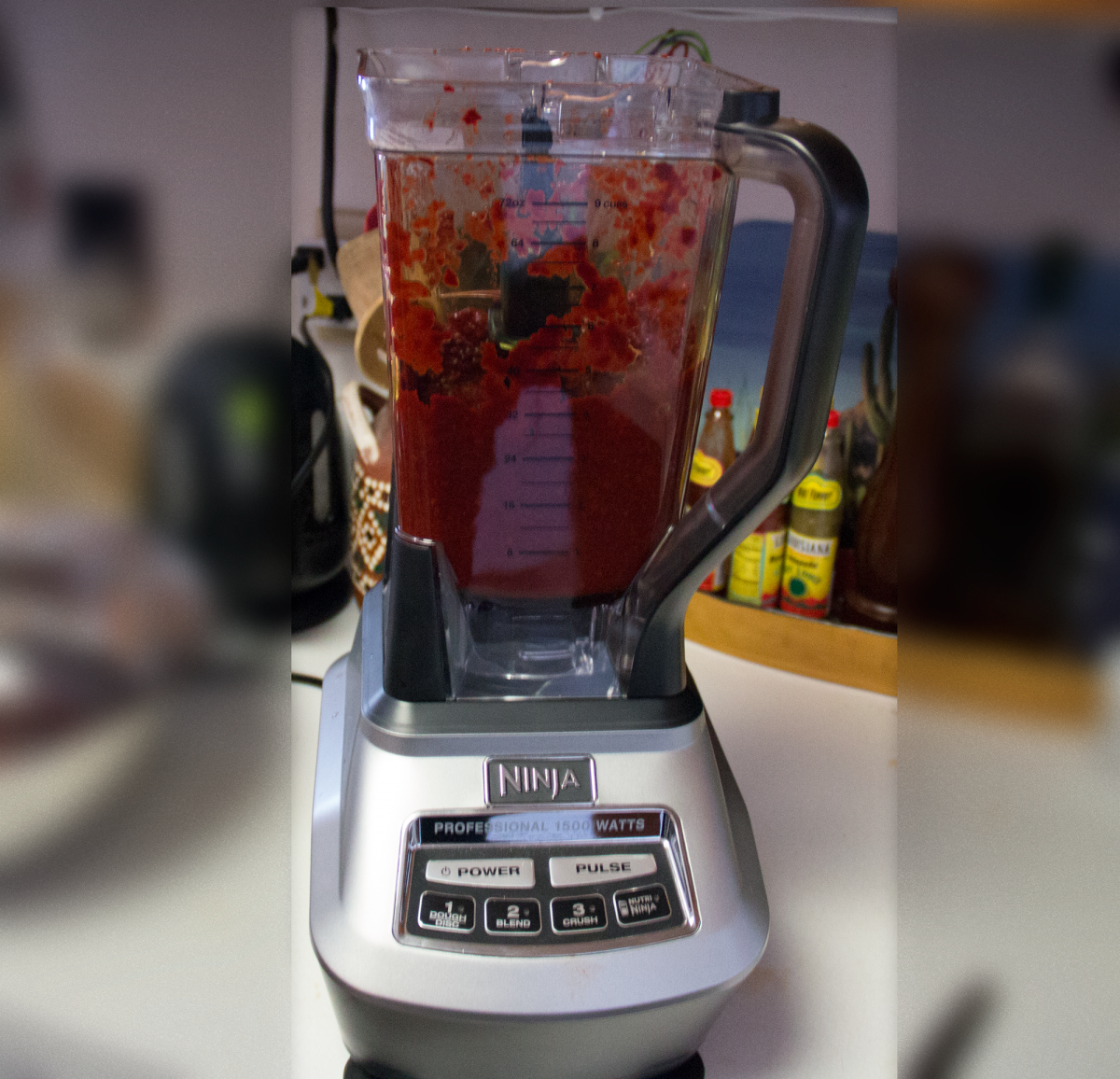 Here are the pureed chiles, the salt, garlic, and flour that will go into the roux in the next step: 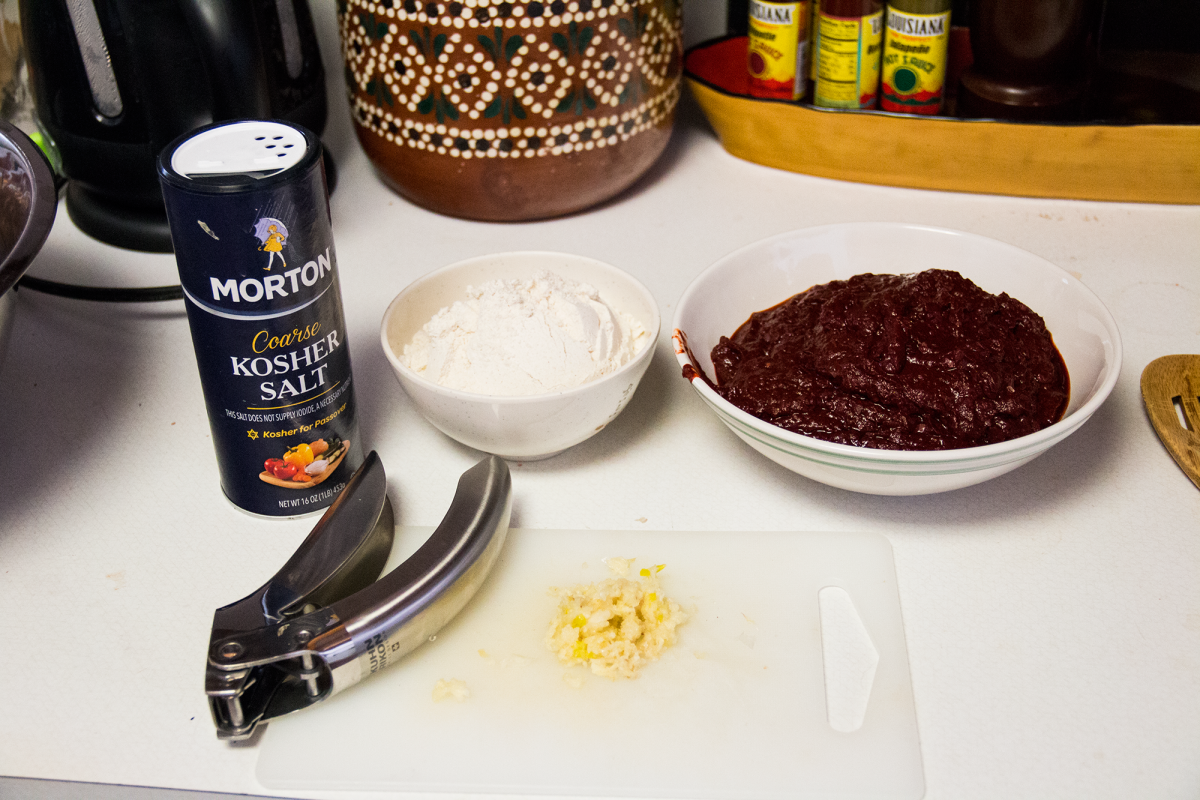 Step 5: The beginning of the roux: Crisco and the masa, (corn flour), garlic, and salt. Cook until the masa begins to darken and you can smell corn cooking. Add the garlic just before you take it off the heat so you don't burn it.

Step 6: Mixing the chile paste into the roux.

Step 7: Add beef broth and mix well. I use a rubberized whisk to incorporate the roux paste into a smooth mixture. 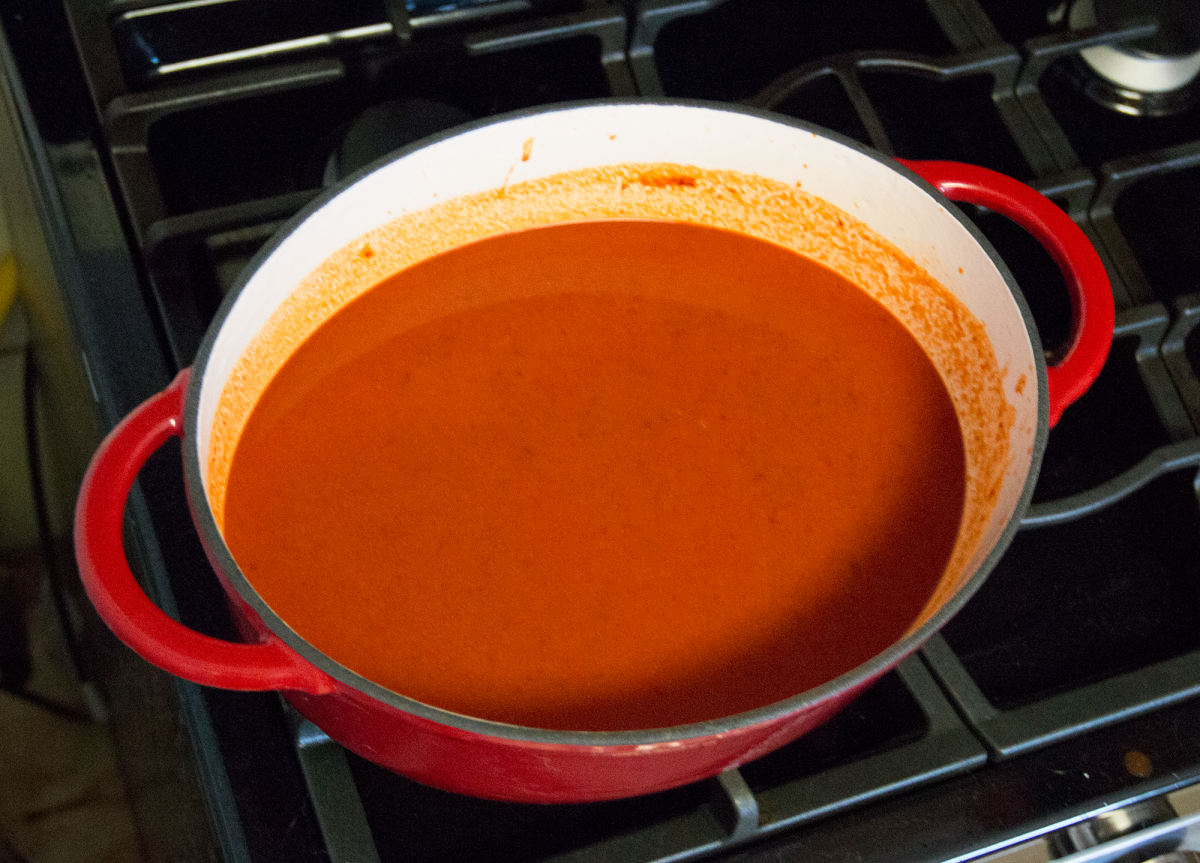 Step 8: Filter the chili solids out of the chile sauce. I've tried skipping this step, and it's just not worth it. In fact, it kind of ruins the entire pot of chili, because the little pieces of skin have no taste, they stick to the roof of your mouth, and they don't have a good feel while you're eating. Take the time to remove them. Again the photo doesn't do justice to the amount of solids shown - it's about a cup of solid nasties:

Here's the filtered chile sauce - smells fantastic, but doesn't bear any resemblance to what it's going to be, yet:

Step 9: Trim and chop the beef into cubes. I used a little smaller dice this time, usually I do about 3/4-inch cubes, these are about 1/2-inch cubes. I trimmed the beef very close, but since you're going to wind up braising the chili for at least three hours, you could leave a lot of the fat on - it will render into the chili and add tons of flavor. (It's only about a week after New Year's Day, so I'm still on the resolution kick.)

Step 10: Brown the beef in batches. Use a large, flat pan and don't crowd the meat, otherwise you'll wind up steaming it, not browning it. When a batch is complete, transfer it directly to the chile sauce with a slotted spoon and start a new batch. Add more oil between batches.

Now you've got a pot of chili colorado, felicidadies! Put the pot of chili in a 190 degree oven for anywhere from three to eight hours and enjoy. The longer you cook it the more fall-apart the beef will be, and the further the fat will render into the chili.

This is a two step chili; first you make the sauce, and then you put the stew together in the sauce. The results are spectacular, producing exactly what I think of when I think of Chili Colorado.

Everyone used to rave about my dad's chili. He called it Jose Duryee's Chili con Carne. It's a lot simpler recipe than this one, and it's pretty soupy, too.